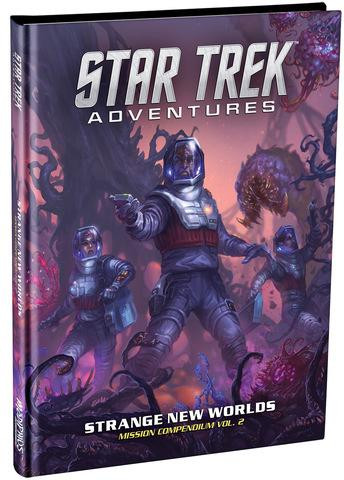 Facebook Whatsapp E-Mail Instagram
Beschreibung Bewertungen 0
Beschreibung
“LET’S SEE WHAT’S OUT THERE IT'S NOT SAFE OUT HERE. IT'S WONDROUS, WITH... mehr
Menü schließen

“LET’S SEE WHAT’S OUT THERE IT'S NOT SAFE OUT HERE. IT'S WONDROUS, WITH TREASURES TO SATIATE DESIRES BOTH SUBTLE AND GROSS, BUT IT'S NOT FOR THE TIMID” -

Strange New Worlds: Mission Compendium Volume 2 presents nine ready-to-play standalone missions for Star Trek Adventures RPG. This book arms Gamemasters with new stories designed to stretch the boundaries of what is known and to challenge Player Characters as they engage in Starfleet’s mandate to explore.